Uniting two continents through music and creating unique sounds, UK-based award-winning DJ/Producer DJ Cable has collaborated with one of SA’s hottest artists Robin Thirdfloor on their new track “Ungasabi”. A mix between two elite genres known as Gqom and UK funky, their new and unique single is a first and must have for every gqom, hip hop or EDM playlist.

Introduced to Robin Thirdfloor by a mutual friend and having a love for gqom music, Cable whose real name Chris Painter,  wanted to create a different sound that isn’t too different from what both SA and UK audiences are used to and one that will be enjoyed cross-continents.

“I got introduced to Robin’s music via a mutual friend, and just had to reach out to him.I’m a massive fan of Gqom so I sent over my UK-take on the genre, whilst bringing my love of UK Funky & Grime into the production process. He got the vibe and the result is this!” say Cable.

A boost of courage in the right direction, the song speaks about not being fearful and facing every one of life’s hiccups with confidence- a power statement and affirmation in one song.

“The song is about not being fearful. I touch on various references which emphasize that I’m not scared of any rapper in the game and I am not scared of any unfavorable situation I come across. The song is a power statement, on the chorus I rap “Abasiyeke senze lento ngenkani ungasabi” let them allow us do this by force, don’t fear. I continue to rap “ithina abenzi bezinto” which means we are the ones who make big moves.” says Robin.

Ungasabi is available on all major streaming platforms. 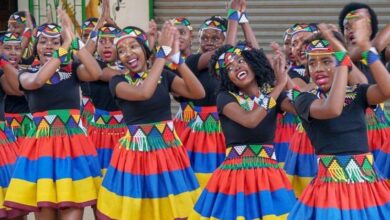