Euphonik Shows How To Secure A Digital Music Distribution Deal. DJ and Music Producer Euphonik has taken it upon himself to help local music stars on the distribution of their music digitally by sharing a small clip that shows how they can score themselves a much better deal.

The DJ is known for helping young stars musically when he can, the story behind Tholukuth hit surprised everyone, it just proved just how great he is at spotting talent and making best of it. He is fast succeeding in his music, he has now partnered with Joox which is a music streaming service that lets you listen to thousands of full-length songs without having to download anything. This partnership was inspired by the new summer banger he titled Amabhoza which is only available on the App.

The song features DJ Tira, NaakMusiq and Bekzin Terris. Fans will be able to stream it on the Joox music app and get down to some dancing. After all Euphonik did say that he wants to give people some great music. 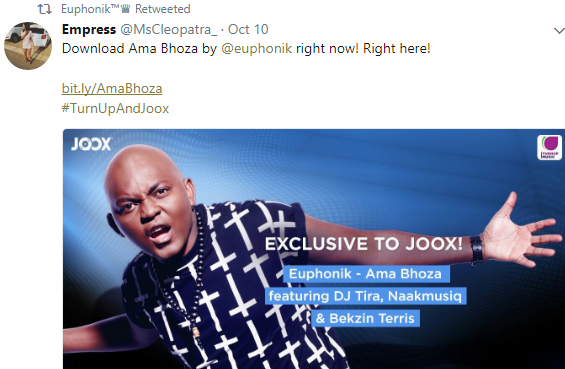