Poet and Afro Musician Ntsiki Mazwai and EFF Political Leader Julius Malema threw insults at each other on twitter few days ago, the two set a good example of what Twitter War really is. As Ntsiki has stated in most of her tweets and interviews that she is an EFF follower, she posted a tweet saying that EFF is a movement not an individual. She said that  she would “pass on the EFF” if the party was being made all about Julius, she is after all famous for being expressive. Juju didn’t take kindly to the posts, he hit back by saying that Ntsiki is a failed poet and a pretentious mole that is obsessed with him.

Julius kept throwing zingers at the musician taking no break at all.  Ntsiki tried to act cool at first but she must have been burning to spew the fire that Juju’s posts was brewing inside her, She responded and said that Juju is worse than Zuma also that he was just angry because she was more qualified than him. This celebrity twitter war follows the one that DJ Euphonik had with TV personality Lerato Kganyago weeks ago. One may say they are for publicity but it doesn’t look like that, these celebrities are so real in their comments about each other.

To prove that we no just making this story up here are tweets from Juju and Ntsiki. 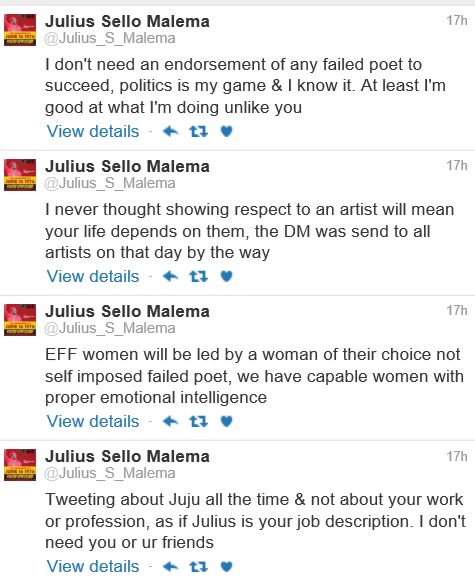 -Juju why are you so angry tho? ???all I said was that you are not eff…eff is a movement. Why you mad b?

-But why dm me about my performance and explaining yourself if I’m so wack? Gtfoh

-I never thought showing respect to an artist will mean your life depends on them, the DM was send to all artists on that day by the way

-You think Julius Malema opinions of me will change my world??? Gtfoh??poetry is an intellectual sport  #Abanandaba (@ntsikimazwai)

To read more on hw people recated to the squabble follow both celebrities on twitter at @Julius_S_Malema and @Ntsiki_Mazwai.