Idols judge and Afro-pop musician Unathi Msengana has broken her history by having her newly released studio album sell out in less than a week.

The album titled Brave, True and Strong. which contains a total of 10 songs is currently unavailable in stores. The Nguwe hitmaker expressed in one of her interviews that this was her dream album since it gave out an idea if who she is as a woman and all that she has been through. “It has been 4 years since my last project and I have gone through a lot, this album is incredibly honest and sometimes raw, but is most certainly a bold representation of where my life is today.”

She shared the news on Instagram that album was sold out in stores. Those who didn’t get a chance to get the album must worry not, Msengana promised that she and her team will work on the new stock and fill up those shelves once again. “My NEW album is Sold out ALREADY Cresta and Randfontein and I’m elated! It was only released FIVE DAYS AGO! Please keep letting me know and we’ll make sure they have stock the next day! To God be the Glory.” she shared the good news on Instagram.

The album is also available on iTunes. You can preview and download that album on the platform. Follow the link provide below to get yourself entertained and moved by Unathi’s heartwarming songs. 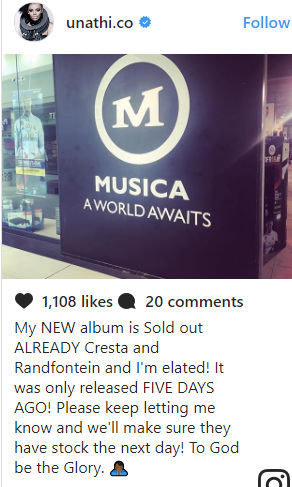